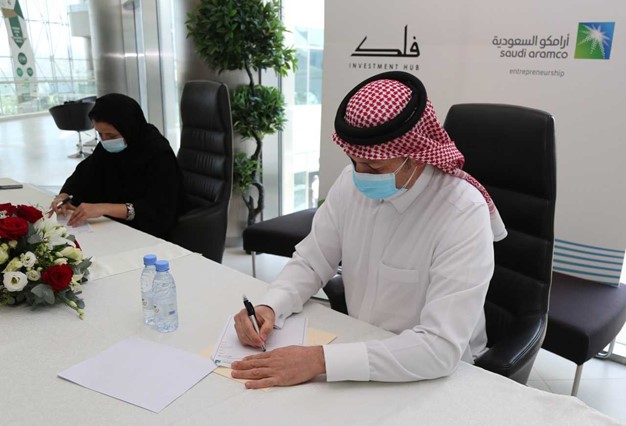 Wa’ed and Falak Investment Hub of Riyadh signed an MOU to collaborate in VC investment and recruitment.
Wa’ed, Falak Investment Hub agree to collaborate on venture capital deals to fund more Saudi start-ups
April 28, 2021 – Wa’ed, the entrepreneurship arm of Aramco, agreed to collaborate with Falak Investment Hub, a start-up investor led by one of Saudi Arabia’s most influential women entrepreneurs, to drive venture capital investment in the Kingdom.   A memorandum of understanding was signed at Wa’ed’s headquarters in Dhahran by Adwa Aldakheel, Founder and Chief Executive Officer of Falak, Hassan Ikram, Falak Co-founder and Chief Investment Officer, Wassim Basrawi, the Managing Director of Wa’ed, and Salman T. Jaffrey, the Chief Investment Officer of Wa’ed Ventures.   The agreement with Falak is the fifth alliance announced by Wa’ed since December as it widens its search for promising Saudi start-ups. The Aramco venture has signed cooperations with Oqal, Saudi’s largest angel investor network, the Royal Commission for Jubail & Yanbu, and two economic development agencies in Madinah, Taibah Valley Company and Namaa Almunawara.   Falak is a unique hybrid of co-working spaces, VC investments, angel investor network and an investment-backed accelerator program for MENA-based tech start-ups with a focus on Saudi Arabia. So far, the start-ups in Falak’s portfolio have generated combined revenues of more than 550 million SAR.   Falak was founded in 2018 by Ms. AlDakheel, a 29-year-old Jeddah native who as pilot, musician, poet and entrepreneur has gained more than 1 million followers on social media for her work to advance the entrepreneurial culture in the Kingdom.   Both organisations expressed confidence that the new collaboration would exploit synergies that increase the likelihood of success for early-stage and growth-stage start-ups through services, training programs, market access, and mentorship.   “With the robust platforms and complimentary resources our organisations bring to the table, I am confident this cooperation will enable us to fund more entrepreneurs and innovators that will add value to the Kingdom’s venture capital ecosystem,” said Wassim Basrawi, the Wa’ed Managing Director.   “The Saudi entrepreneurial ecosystem grows through cooperations and alliances and this collaboration with Wa’ed will leverage the synergies between our companies to benefit entrepreneurs across the Kingdom,” said Ms. AlDakheel, Falak Investment Hub’s Founder & CEO.   Hassan Ikram, Falak’s Co-founder & CIO, said Falak’s group of 17 start-ups – 15 are currently in Falak’s investment-backed acceleration program – are a good compliment to Wa’ed’s own end-to-end offering, which includes venture capital, loans and an incubation and mentoring program. Wa’ed will also leverage Falak’s acceleration programs, angel network, virtual bootcamps and mentors.   "The collaboration with Falak Investment Hub is very exciting," said Salman T. Jaffrey, the Chief Investment Officer of Wa'ed Ventures, the venture capital arm of Wa'ed. "It gives us the opportunity to invest in Saudi companies that have a degree of traction because they have gone through accelerator programs and raised angel investments."   Through its venture capital arm, Wa’ed Ventures, Wa’ed is the largest and most active VC investor dedicated to Saudi-based start-ups and, through its loan financing arm, the Kingdom’s only no-collateral lender to start-ups.   Since its founding in 2011, Wa’ed has deployed more than SAR 375 million in loans and venture capital investments into Saudi-based start-ups.   Wa’ed Ventures has committed more than $50 million across 30+ portfolio companies, which include FalconViz, a maker of industrial drones, Golden Scent, a leading Saudi beauty e-commerce platform, and Ynmo, the Middle East’s first Arabic-language instructional software for children with autism and other special educational needs.   Falak launched the first angel-backed acceleration program in Saudi Arabia, and offers local entrepreneurship podcasts, incubation and acceleration programs for government entities, virtual bootcamps across MENA and an angel network partnered with Saudi Venture Capital in a co-matching program.   Falak has graduated two batches of start-ups from its Flagship Acceleration Program and applications for a third batch close at the end of May.   Through partners such as Amazon and HubSpot, and freelancers that offer expertise in recruitment, bookkeeping, cloud hosting and analytical tools, Falak has built its own mini ecosystem of support services to Saudi start-ups.     About Wa’ed Wa’ed is the entrepreneurship arm of Saudi Aramco and the largest and most active institutional venture capital investor for Saudi-based start-ups, providing end-to-end support in mentoring, incubation, loan financing and venture capital investment. Established by Saudi Aramco in 2011 to harness the Kingdom’s entrepreneurial spirit, Wa’ed is an essential enabler of new business growth and economic diversification through its loan financing activities and Wa’ed Ventures VC arm, which oversees a $200 million investment fund and a portfolio of 30+ Saudi-based companies. Based in Dhahran, Saudi Arabia, Wa’ed is a fully owned venture of Saudi Aramco. www.waed.net   About Falak Investment Hub Falak Investment Hub is an investment-backed acceleration, angel network, business hub and start-up academy offering an ecosystem of support to Saudi entrepreneurs. Its mission is to find, enable and grow the next unicorn start-ups of the MENA region. Falak’s Flagship Acceleration Program invests between SAR 250,000 to SAR 1.5 million in each of 10 superstar start-ups for an 18-week accelerated journey. Falak Investment Hub is licensed by the Saudi SME Authority and is a partner of SVC and the Ministry of Investments (MISA).  For more information on Falak: www.falak.sa For the acceleration program: Flagship.falak.sa